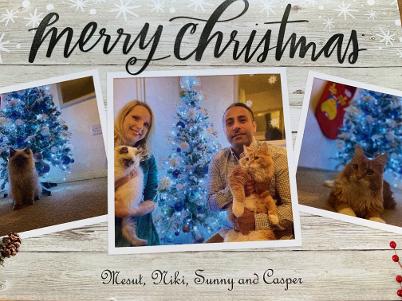 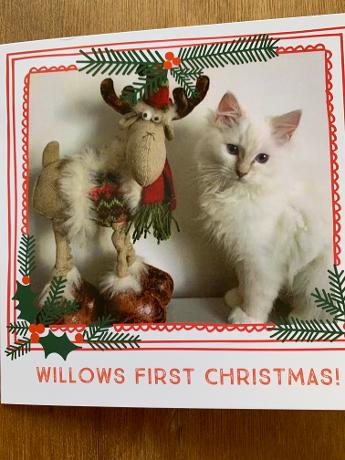 Snowpoms Ragdoll kittens He loves a fuss, makes us laugh and is already independent. Sylvia is a very special breeder in whom you can have absolute trust. The love with which she prepares her kittens is unrivalled. They are family, not just pets and Sylvia is always there for advice and support as they develop.

Especially during the Covid 19 outbreak, we are using our lovely local Courier:

Simon who is delivering our babies, excellent. considerate and careful, also reasonably priced !

PLEASE NOTE THIS IS MOST IMPORTANT

MY CATS ARE FROM HCM/PKD NEGATIVE TESTED BLOODLINES

Some of my qualifications:

Diploma in Feline Behaviour and Psychology

Supporter of the Cats Protection League

Worked with many vets, including  Professors

Anyone who wants a new kitten - what to do, what NOT to do !
Anyone who needs help or advice on most problems with most animals - I've been there myself !
Anyone who is concerned about introducing a new kitten to a home where there are already cats present.......
I have a "DIVA" as well - she is jealous of any of my other cats - and regularly gives them a slap !

but its not such a big problem as you think

I HAVE JUDGED CATS, DOGS AND HORSES,

(so my standards are very high !)

I am a fully qualified Kennel Club Dog Judge

I have bred   everything from

just too much information to put on here,
but believe me I have the knowledge & experience to help anyone !

I started breeding with MICE when I was 6 yrs old, by the time I was 11 yrs old I was seriously involved with genetics,

and had 147 Mice, all  categorized according to  to colour, temperament etc. etc.
I then moved on to Rabbits, then Guinea Pigs………. dogs,

Arabian horses, then Miniature Ponies…….. (under the Prefix of Ashuer)

My beautiful Tabitha was a Seal Tabby Point Siamese from the Beaumaris pedigree bloodlines,

that I bought (more like rescued) from disgusting awful so called breeder premises back in 1971,

she was in a dreadful state, my vet at the time told me she was pregnant and did not think she would make it,

she was vicious and  not humanised at all,

initially she had to live in the greenhouse

purely beacuase she was impossible to handle and integrate with my cats,

however subsequentley with much TLC from me she pulled through and had 6 babies .....

born behind my couch in the living room,

my first litter of siamese born the weekend of the royal wedding.

I applied for a Prefix, which originally was SHARUE (Anagram of my surname at that time)

Then went on for the next 37 years went on to produce many champions and premiers in the UK and worldwide.

GRAND CHAMPION SHARUE SUN PRINCE is a legend, my man, so special to me,

it was heartbreaking to lose him because of a vet's cock up ......

Also of course the beginnings of the Shimileeta line,

via my GRAND CHAMPION PLATINUM PRINCE  Oriental White, who got 14 Grand Challenge Certificates in 14 shows,

Jenny Bauerfiend (Shimeleeta Cats) this lady came to me for a siamese pet, but I had Snowleopard - an Oriental White boy, she fell in love with him and also later the Chocolate Siamese boy, Willy Wagtail

this was thestart her breeding career and to date she is still a crazy cat lady like myself,

and she has bred many champions. still very involved in the cat world today.

I also exported many cat all over the world, as far as South Africa - and of course only sent the very best,

hence many more International Champions worldwide, to be honest to many to list here !

Also in the '80's I was on the committee of The Moulton Park Animal College in Kettering,

a position I held until I moved to London in 1997.

when I taught them how to run a Licensed Boarding (FAB Approved) Cattery, also a Breeding Cattery.


In 2007,  I imported from a breeder in Germany, a beautiful Seychois boy,

the first International Champion of a new breed “Seychellois”

sadly this poor boy was so ill when he arrived,

smuggled into the country and full of antibiotics

and died only two months later,

with me in my bed,

he was a lovely special boy exploited by breeders with a house full of sick cats,

it totally broke my heart, just how ruthless people can be for "red cards" and money.

the Number One Siamese in the UK at that time, and a legend in the Cat Fancy.

Sadly his death at aged 14 was due to a veterinary error with the wrong medication,

plus  the ongoing problems of illness in my cats from Lacota,  it was too much to bear.

especially my beautiful stud boys; and I stopped breeding Siamese and Orientals,

as I refuse to breed with sick cats.

So on top of the already sadness and  pain, this  took me into the depths of depression.....

I also had a severe injury from an accident in 2007,

which left me immobile and almost impossible to care for my many cats.

With a broken heart I was forced to re-home my babies all to pet homes,

all free to the new owners, also had to relocate to be cared for during my immobility,

Then during the later part of my rehabilitation, able to walk somewhat again,

Being a person to only do things right, also strive to achieve the best;

I finally completed my Judging Examination Certificates with the Kennel Club,

and achieved Qualifications as a Full Kennel Club Judge in late 2014.

and discovered what an amazing, underestimated  breed for any age, any family,

such a laid back breed I felt was perfect for  both OAP's and families with children.

Being  totally smitten with what I feel is the perfect cat for any family,

My cat breeding career was kickstarted again, and sadly  finding such a small gene pool in this country,

I knew I had to import outcross Traditional bloodlines and knew yet again I had to only produce THE BEST,

anything less should not be bred !

(and PKD, since we are told it is not relevant to the Ragdoll, but for Persians)

I know I produce the best, nevertheless the cost of my kittens is still pet price

and considerably less than some "breeders" are charging !
although I know 99.9999% are top show quality.
I honestly feel that if we strive to breed any species it should be the best,
I feel that anything less is not worth the effort.......
ALSO - It does not cost any more to produce beautiful show quality babies,
than to breed something not worth the time  and effort.
(unless of course you are a backyard breeder and/or scammer)

A  lady who bought a "cheap" Maine Coon kitten - the breeder told her was Maine Coon, gave her fake paperwork
(she already had Maine Coon)
but  she ended up with a 3 week old  a Mixed breed Moggy

To you inexperienced people who want a kitten -
please note, the majority of kittens are "fluffy" in their first few weeks,
subsequently they will either become the kitten/cat you wanted,
or you will become yet another stastistic of a scam
and these poor kittens are "farmed" just like puppies.......
PLEASE DONT GO THERE !
I Rest My Case and dare you to go to a backyard breeder, when I am here to help you !!!!

Below - Me with "Sonny" (Champion Snowpoms King of Klubs) 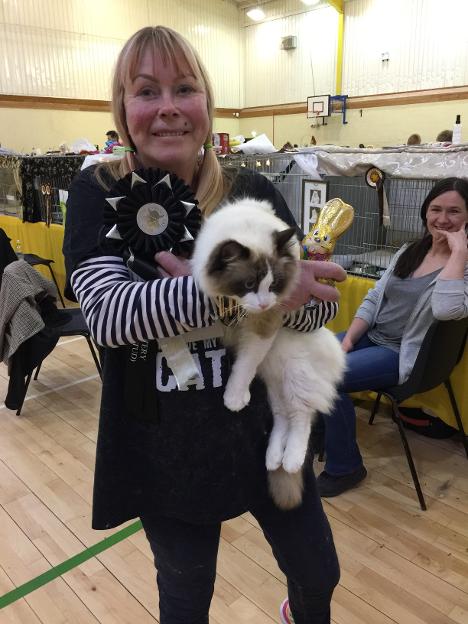 Ragdolls bred from  the original pure bred line from the USA in the 1970's -
PATRIARCA the TRADITIONAL Ragdoll Bloodlines, from USA, England & Europe
for outstanding Health, Temperament, Size and Type

If you are looking for a Ragdoll Kitten,

it is Important - Please read this !

Not all Cat Breeders have the welfare of their kittens at heart, many are just out to make money !

I see so many so called "breeders" advertising on the Internet,

at 8 weeks when they are not fully weaned.

*** please be advised, genuine reputable breeders do NOT SELL KITTENS unless they are

3. Microchipped, and registered to you the new owner

4. Vet Checked, with parents that are HCM negative.

Kittens that are sold too early can have psychological problems if taken away from their Mothers and litter mates too soon and homed too early.

Weaning should begin at around 5-6 weeks,

and homing not before 12 weeks of age.

This is what is recommended by the Breed Clubs and Registration Bodies in the Cat Fancy.

A "cheap" kitten is not necessarily a healthy or genuine one !

All the time back yard breeders advertise so called Pedigree Ragdoll Kittens at back yard prices,

and YOU,  the public are duped by them, if you the public continue to buy from them, they will continue to produce essentially incredibly bad quality usually cross bred ragdolls,

to sell to unsuspecting buyers ....

DO want a kitten that has a good start to life,

DO want a kitten you know is genuine Ragdoll

DO want a kitten that is healthy with no known defects in the "pedigree" - all reputable breeders cats will be tested negative for HCM, this is of the utmost importance

The kitten should have had a full course of vaccinations, two health checks, also micro-chipped with a pedigree and registration certificate, (and often neutered, this can often reflect in the price) personally I do not believe in neutering too you, and between 5 - 6 months is the best time..

You will pay much more of course if they are sold for breeding.

be careful and wary when considering buying for breeding.

You might find it hard to buy breeding stock from REPUTABLE breeders unless you can provide references etc.,

genuine reputable breeders do not advertise like this - the ones you may see are just out to make money and care little about the things that matter, such as pedigree, testing etc. etc.

Thank you for your time and for caring about the new kitten you want. 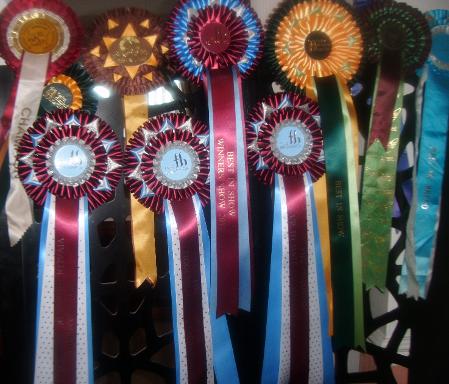 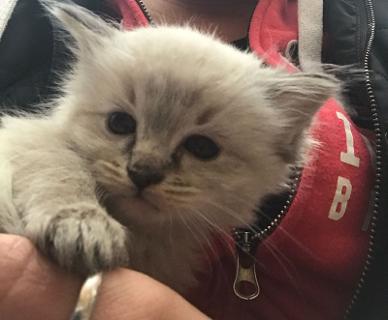 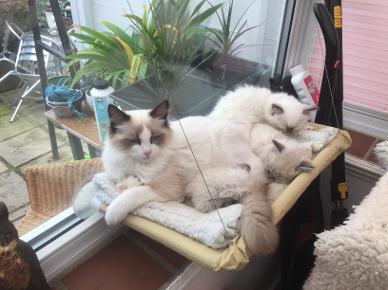 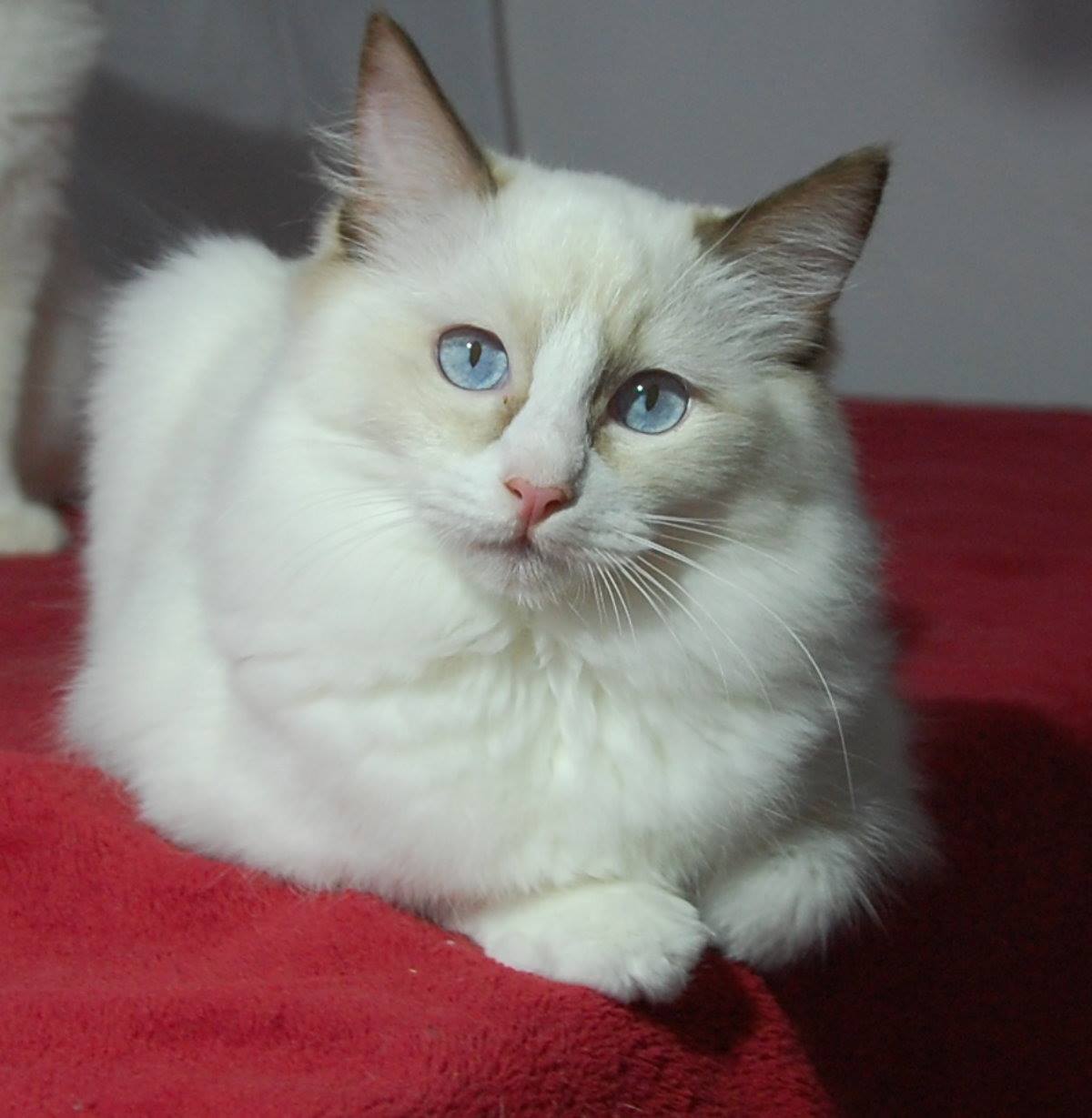 Photo above: CHAMPION UP TO DATE DU MASQUE BLEU 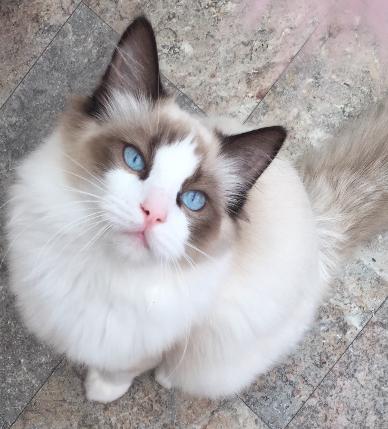 Above, Snowpoms King of Klubs "Sonny" my lovely young boy; MY NEXT CHAMPION - at his first shows "Sonny" achieved BEST IN SHOW both on Saturday and Sunday - son of my wonderful stunning. boy from Germany ......"CHAMPION UP TO DATE DU MASQUE BLEU" 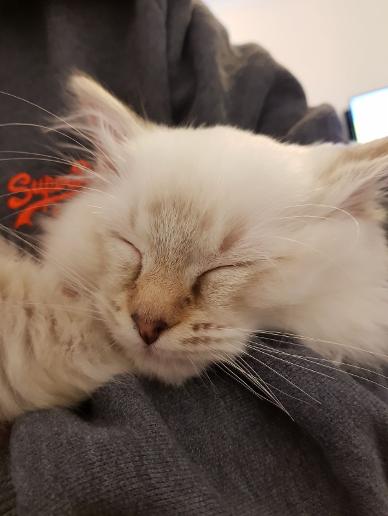 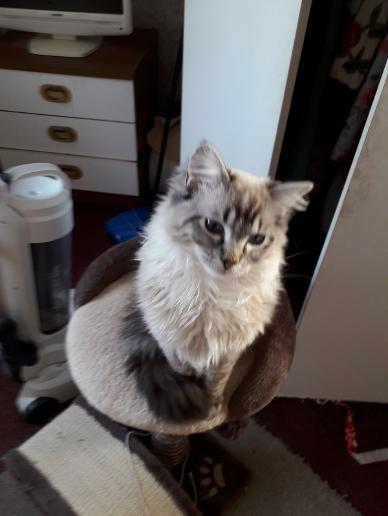 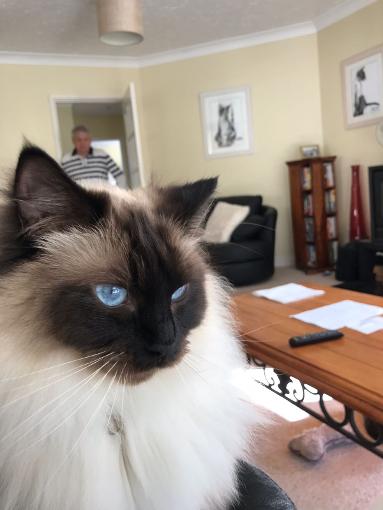 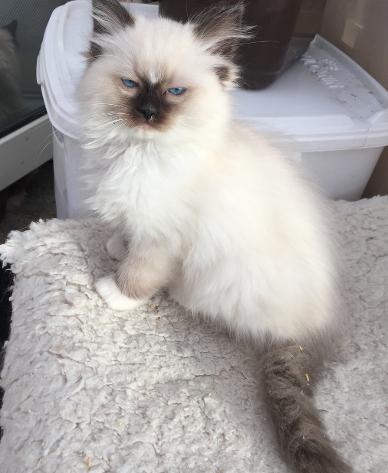 The above and photos and to the  right are from the owners of my lovely fur babies.

Sadly don't often get the time to upload them to the website for ages !

I do my best, but of course - my cats come first and with 17 of them they do take some looking after !!!

If the kitten is not registered,
it is NOT a pedigree,
even if the 'breeder' provides a family tree which would suggest it is.
A cat or kitten MUST be registered for it to be a pedigree. 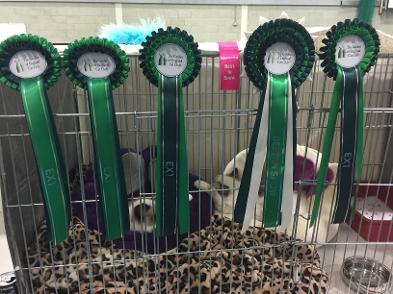 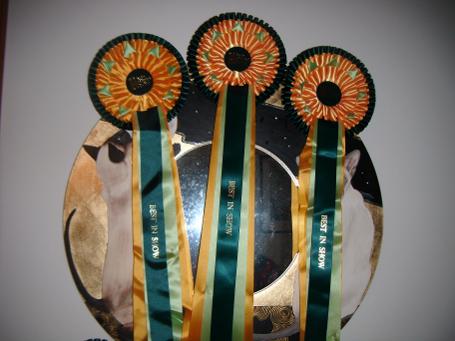 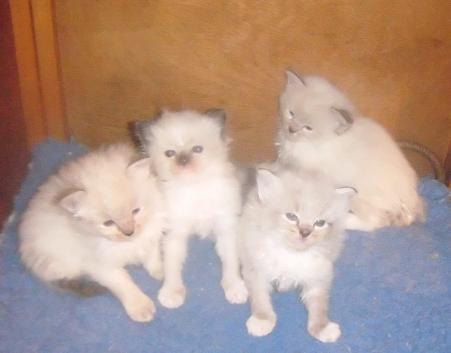 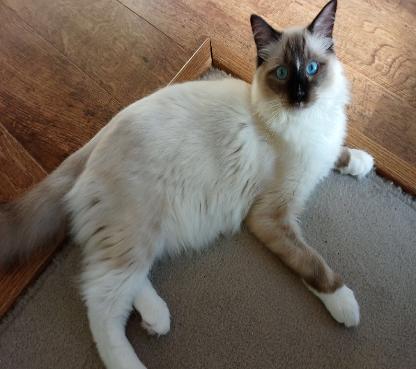 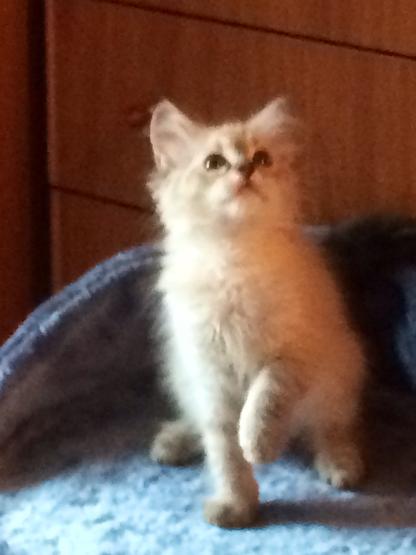 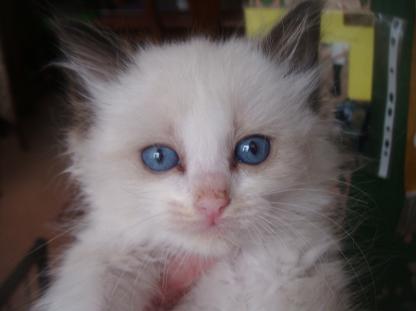 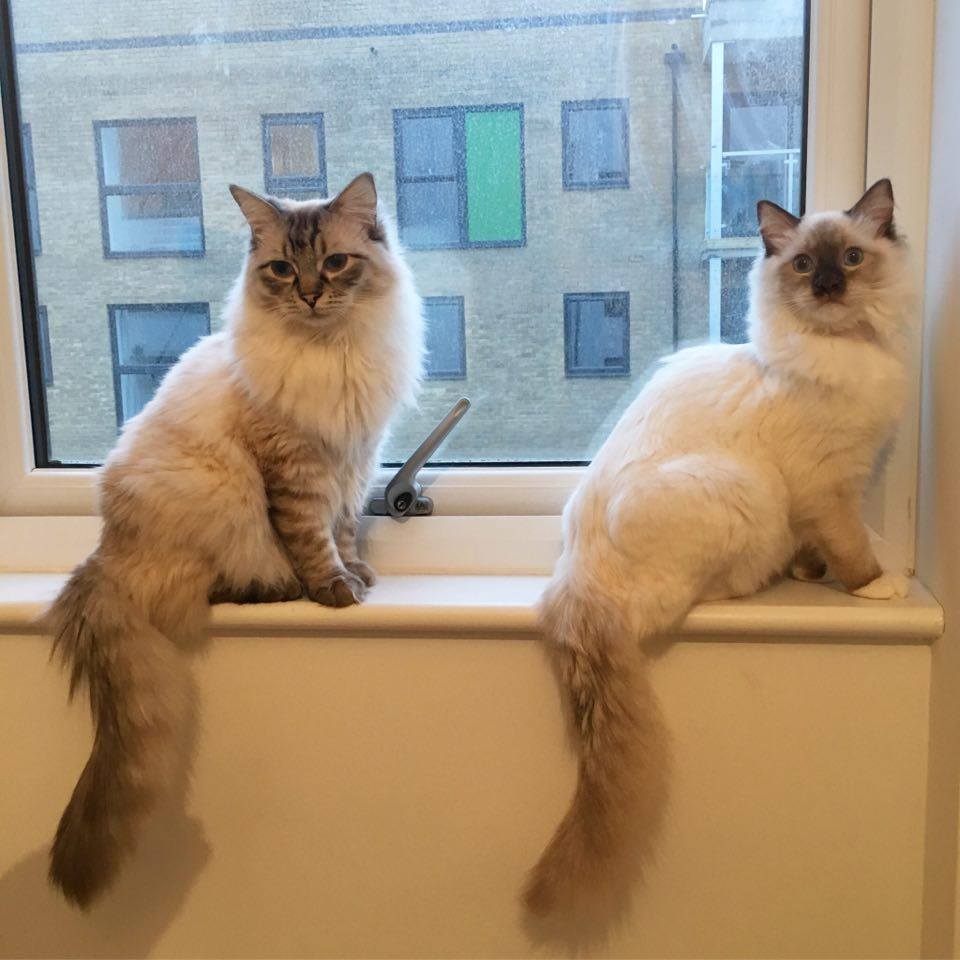 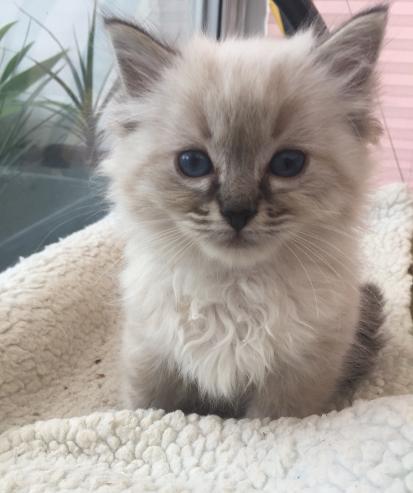 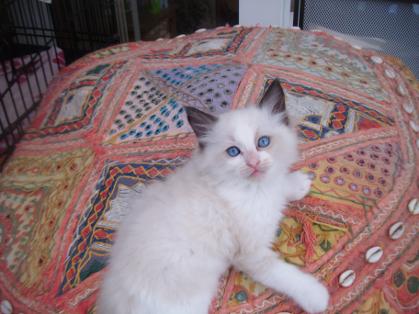 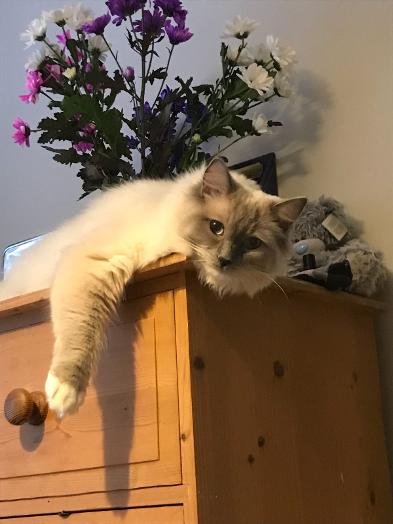 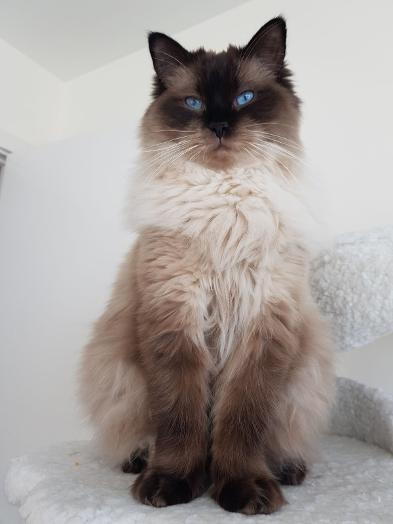 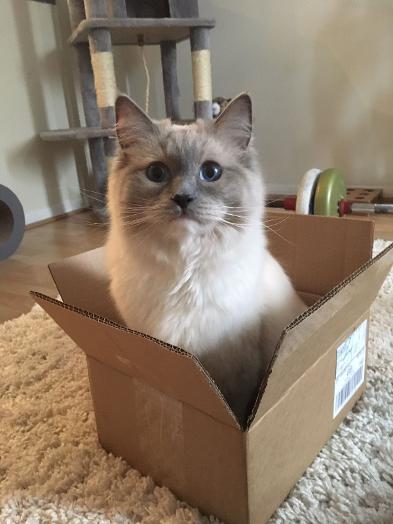 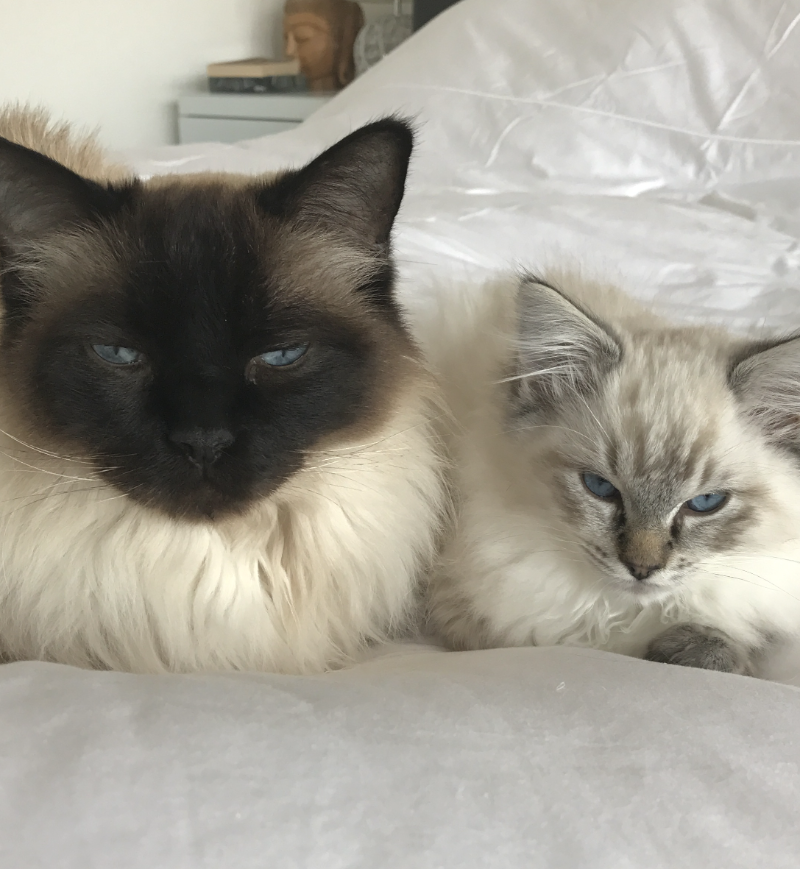 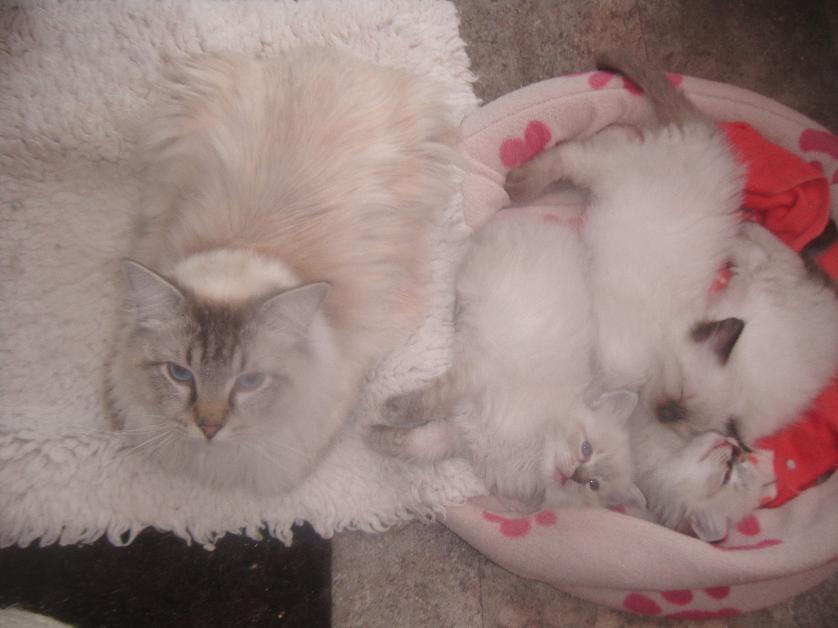